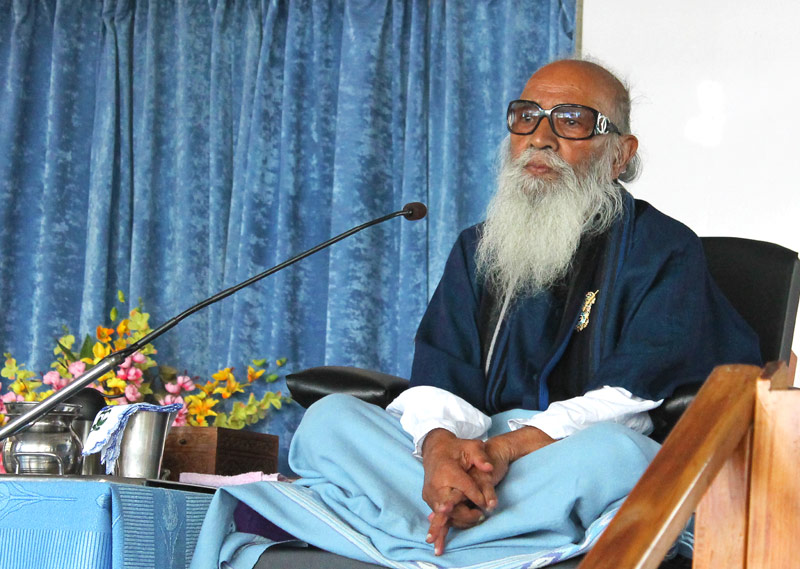 Paul: … When I am listening to your words, either on a tape or here, there seems to be a dual process happening. One is of the mind, which is listening to the meaning, and the other is of a higher awareness, which is not intellectual. That creates a sort of duality or almost an unease, for I feel I should be listening, giving reverence to the meaning of the words that you are speaking, because they are the words of Guru. But, at the same time, by trying to understand or give meaning to the words, I am removing myself from the Pure Consciousness that those words are conveying. Could you perhaps say something about this?

Swamiji: This will be explained. When you are awake, the waking state consists of time and space. When you hear and I speak, I use words and the mouth, and you hear and use the ears. But in that hearing, neither is your heart or mind in your body nor is there a sense which is hearing that you can explain as the mind. You never hear with the mind. But your assertion, your statement, is that “I hear your words and try to make a meaning.” At that time, there is a way that you should not listen to words, because sound is being used to cancel the meaning that words make.

When I speak, I know that you want to hear. When you want to hear, that means your desire makes me speak. If you were not there to hear, why would I speak? So my side is that it is not that I am speaking—it is your desire that has become me and began to speak. There is nobody that I am as separate, as somebody speaking. Since by my speaking your desire becomes fulfilled and your heart and mind are not there, then neither are you there nor is my sound there. It is only Pure Being, which, you are saying, does not want to listen. Pure Being has no need to listen. It is only your mind that speaks and hears, and that creates the difficulty of not hearing or wanting to continue to hear. After hearing and meditation, when you reach there, then that Being has no need to hear or say anything.

Paul: Thank you, Swamiji. That is so incredibly difficult, I’ll have to ask for a transcript of it to read. It will take a long time to get, but I think meditation on those words will reveal it.

Swamiji: When meditation arises, you are no more a human body. But the difficulty for a human being is that he cannot give up the three states. In the waking state he hears, and in the dream state he also hears and says something, but neither is the dream state there nor is the dream-state mind there. You come to know this when the dream is broken—neither are you there as a dreamer nor are the dream figures there. What suddenly happens to you? You become You. You become You, but soon, after a second, you get born as a Paul, again with the same things, with ears, eyes, and the body, and then again it is the journey. Then you think, “I am born again in the waking state.”

You have to understand that this birth in the waking state is not there. But the complication is that everybody is astonished by this and says, “How does the waking state start, which is true? How does the dream state start, which is true?” If you come to know that in the dream state all the lectures and all the things you have heard and seen become nil, in the same way, in the waking state, if you do not recognize that you are Paul with name and form, then all this is not true. You are reaching there, where birth and death are not. Space is there. Sat (Pure Existence) is there, but Sat cannot be explained. How would you explain this Space? But you are a body, because you had to be a body to reach this state that you meditate. You know you have a heart as long as you are awake. You know you have a mind as long as you are a dreamer and wakeful. But when the mind is not there, then where is Paul?

It is somehow to be realized that a human being is a realized being. But now, a realized being is born. The difficulty of being born with senses is that the senses function and energy is there, the breath is there, coming and going and a human being has never been able to know why the breath comes. It comes and goes. You hear breath coming and going and, in the same way, you hear my words coming and going. Words have meaning for you, but my words lead you towards that which has nothing to do with listening and making meaning. That is their only value.

I do not exist as a person who is speaking. You do not exist as a person who is hearing. That one Being has nothing to do to understand meaning. You become one with That. There, neither I am there to speak nor you are there to listen. Then you don’t have to worry about what I say or what you hear. You will just be in the samadhi state (the intellect absorbed in the Self). That is called samadhi. Samadhi is where a girl is not, a boy is not, where man is not, mind is not. But you hear because you have a mind—you think you have a mind. When I say that you hear because of the mind, if you are not the mind you immediately cancel it and say, “Swamiji, you continue saying this, but I have no mind.” [Laughter] If you have no mind, then who hears? So that is a mixed being. It goes on, and we cannot describe and explain what happens.

All human beings—watch—are human beings. I say this because I see you as a human being through my eyes [he takes off his glasses], which are the eyes of this [he points to his form]. But I say that whatever these eyes see as the truth, it is going to be changed, it is going to die or end. Then why do you have a meaning for it? That which appears and disappears or dies, what is it to you? Because you are unchanging. You say, “When I am in that unchanging state, then the difficulty comes that my mind tries to make meaning,” but if you cancel the mind, it will not make meaning. These people here—and many of them are here for the last forty-five years—do not know a word that I have spoken. [Laughter] When I come, their expectation, their desire, becomes this [he points to his form, or Guru], so their desire is speaking. But it is such a secret that you cannot see that [he points to his form] “My desire is speaking.”

Some of the things are released like this, but as long as you are not in samadhi, the difficulty is that the ego-intellect-mind exists as true [he makes his hand into a fist]. And it will remain so unless you somehow succeed in knowing that the ego-intellect-mind does not exist—rather, You exist and You are creating the whole world, including yourself. As long as you are ever present, you are ever present. But somebody will think, “How has it happened that you have a mind?” No explanation. So all the scriptures are very sneakily and intelligently trying to approach you so that you should succeed in destroying the mind. You call it shanti (peace). [Laughter] Destroying the mind means you are shant (peaceful), which you are at this time. Everybody is shant. Shanti is, it is always shant.

But who disturbs? Illusion. And you love the illusory, creative intelligence. But when you know, “I love it because I made myself as creative intelligence,” then why would you hate it? Then you will love the ego-intellect-mind. But you will keep knowing, “What did I do to create this ego-intellect-mind?” You will know, “I am the one who is at the source to create the whole England, the whole America, the whole world.” You hear this, but you don’t get it. You say, “Well, Paul has not created England,” and then so many other causes are given. It happens that as long as you are not in samadhi, the mind has to speak. A human being, Paul, has to speak, and if he speaks, then he will have duality: Vivian and Paul, and Sarah, and other friends who come for meditation. But with the maximum satsang that he is doing, it is giving everybody some sort of uninvolved state. But everybody is not uninvolved. They again have to have action on the body level in the waking state and in the dream state. They are the same at that time: they forget.

As a child who was born and named Paul, you forgot why this name is yours. When you are hearing it, you are not making any meaning. “Paul” has no meaning, but it is there. It is like that same situation—that which is not there, but it is there! [Laughter] When you reach the samadhi state, then name and form and the world exist as the Self, as the samadhi Being, the Sat Being. That is why it is Brahm Satyam (Oneness is Truth) at that time. If Brahm Satyam, then why do you have to say jagat mithya (world is illusion)? [Brahm Satyam jagat mithya is a famous statement from Vedant.] If you know “I alone am,” then why do you have to say, “I am Paul”? When you are the one who was there before hearing, you are the same one who is there after the talk is over. That is ever present.

That ever present has made this body, and that alone knows. That alone knows—I can say this—but if that alone knows, why the mind? The moment he made the mind illusion, then the mind created this world. The thread creates all the mala (rosary) beads, and as long as the thread is there, then the mala is intact, the world is intact. Only in samadhi do you reach the Source. But here it is for you to understand what I am saying. When you reach the Source, why is this manifestation? Then you have listened to me correctly that the Source alone is!

I speak only from the Source, to let you know that words have no meaning if the Source is not there. So the Source is there, one with you. The Source is here, one with me. When the Source is one, then there is no duality, and no distance between You and You, You and You [he points to his form and Paul’s, back and forth]. But you call the body as You. That is where in the heart of hearts you should understand this, and continue being Paul—a good person, with everything like meditation—while  knowing that Paul never existed because he was never born. This is the difficulty for a mind: the moment the waking state mind arises, in a split second you immediately say, “This is in writing. ‘Black and white’ is the truth. Somebody’s speech is not the truth.” So then we also use words. You understood it. That’s all. Thank you.